Anaphylaxis occurs when histamine-containing cells in the body are activated by an allergic trigger binding to allergic antibody (IgE) on the surface of the cell. These cells release large amounts of histamine and other allergic mediators which have widespread effects. 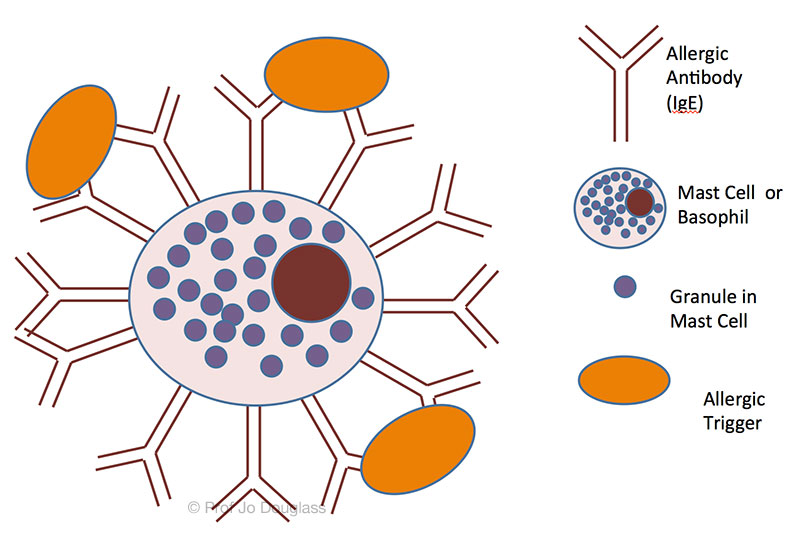 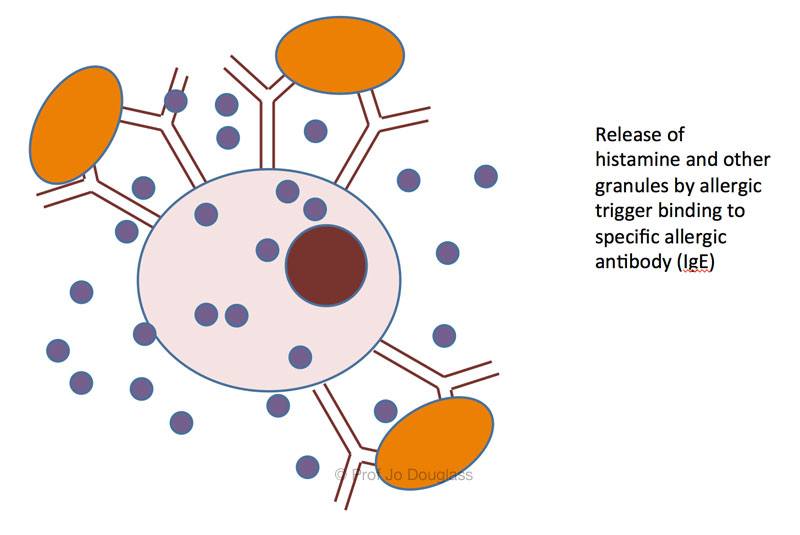 
Anaphylaxis is the most severe form of allergic reaction. These reactions are usually sudden in onset and cause:

c) Skin rash.
Anaphylaxis can start out as an extremely itchy skin rash which often starts in the hands, axilla and groin. Typically the rash will cause itchy welts, like hives. Some-times at the beginning of a reaction, the rash is just a severe flush or redness.

Symptoms of difficulty breathing or low blood pressure are the most important symptoms of anaphylaxis because they can endanger life.

Can people die from anaphylaxis?

Most anaphylaxis does not result in death, yet anaphylaxis probably kills about 10 Australians every year, but the tragic thing about those deaths is that if the trigger could have been avoided, then the death would likely not have occurred. The most common trigger of fatal anaphylaxis reactions is medications, causing about half of deaths from anaphylaxis, whilst food allergy and stinging insect allergy make up most of the other causes.

What allergy triggers can cause anaphylaxis?

In studies of anaphylaxis, about half are caused by medications. These are often medicines given intravenously such as antibiotics and general anaesthetics or pain-relieving medications.

The next most common cause of anaphylaxis is insect stings. In Australia honey-bees cause most of the severe reactions to insect stings, but other insects that are important are Jack Jumper Ants, paper wasps and European wasps. It’s odd to think that the most dangerous Australian animal, year on year, is the honey-bee!

Foods are often mentioned in media reports and are often top of the list in terms of community awareness and concern. The most common food associated with severe reactions is nuts including peanuts and other tree nuts. In children egg, milk and wheat can be important, whilst in adults shellfish and fish along with seeds are the most important foods to which people are allergic.

Sometimes no obvious cause for anaphylaxis can be found, whilst some people react to unusual triggers such as latex rubber, exercise or temperature changes such as heat and cold. Some people suffer from conditions that can make them more likely to suffer from anaphylaxis, such as mastocytosis.

How can anaphylaxis be treated?

The most important treatment for anaphylaxis is to identify the trigger and to then avoid it. One of the most important roles of the specialist allergist is to precisely identify what a person is allergic to, so that good advice can be given. Avoiding the allergen trigger can be relatively easy if it’s a drug, where advice from the patient and a medical alert bracelet can be used to let others know. Other allergic triggers are more difficult to avoid, such as a food, like peanut. When the allergic trigger is a food a dietician with specific expertise in food allergies can be extremely helpful.

The most important treatment for anaphylaxis is adrenaline. Antihistamines and corticosteroids can be used but are second in place to adrenaline. Asthma treatments can also be very important in those who suffer from asthma.

What should people who are at risk of anaphylaxis do?

People who have suffered from anaphylaxis should:

Make an appointment with Melbourne Allergy Asthma & Immunology Consultants to make an avoidance and treatment plan for anaphylaxis.